I will continue my study of the Gospel of the Kingdom and the passing of Jerusalem shortly. In the meantime, I want to share a great article by Daniel Rogers, who will be one of our speakers at the upcoming Preterist Pilgrim Weekend, July 12-14, 2018.

Stephen, the Coming of the Lord, and the Passing Away of the Law

When we first meet Stephen in Acts 6, the Scripture says that he was ‘full of Spirit and wisdom’ and ‘full of faith’ (Acts 6:3, 5). He was also a man who was ‘full of grace and power’ who could perform ‘great wonders and signs among the people’ (Acts 6:8).  His message interested some, and they rose up in disagreement and argued with Stephen, but they were ‘unable to cope with the wisdom and the Spirit with which he was speaking’ (Acts 6:9-10). Like Jesus, they were unable to answer, so they colluded to set up false witnesses who accused Stephen of speaking blasphemous words against Moses and against God (Acts 6:11; cf. Matthew 26:59-61, 65-66). In Jesus’ trials, He was accused of saying that He would destroy the temple and rebuild it in three days (Matthew 26:59-61). This was something that Jesus said, but they presented it as if Jesus was speaking against God (John 2:19). In like manner, Stephen was accused of blaspheming God, Moses, the Holy Place, and the Law by teaching, ‘Jesus will destroy this place and alter the customs which Moses handed down to us’ (Acts 6:14). It was not that Stephen was preaching something different from this message – for it is consistent with the preaching of Jesus[1] – but, like the trials of Jesus, the purpose of the message was misconstrued. Stephen’s entire defense in Acts 7 demonstrates that he was not speaking evil of God, Moses, the temple or the Law, but that it was in line with God’s eternal scheme of redemption. His masterful presentation was met with hostility, and Stephen lost his life because of his faith (Acts 7:60). The thing is that the relationship between the coming of the Lord and the end of the Law, as presented by Stephen, is very powerful!

Stephen: His Defense of His Message

Following the legal presentation of the witnesses in Acts 6, Stephen began to answer the High Priest’s question: “Are these things so?” (Acts 7:1). Stephen begins his defense by tracing the life and promises made to Abraham (Acts 7:1-8). Following this, Stephen recounts the story of Jacob and the twelve patriarchs and their struggles with famine and the eventual oppression that their descendants would face following the death of Joseph (Acts 7:9-19). He then retells the account of Moses and the deliverance of the people from the hand of Pharaoh (Acts 7:20-43). After the long history, Stephen reminds his audience of the tabernacle that was made by Moses and carried into Canaan by Joshua (Acts 7:44-45). David wanted to build a permanent house for God, but it was Solomon who constructed the temple (Acts 7:46-47).

This concise history lesson of the founding and development of Israel served the purpose of setting the stage for Stephen’s argument. Despite the wonderful history of overcoming difficulties, service to God, and preparing a house for God, Stephen had a tough message for the people to swallow: “The Most High does not dwell in houses made by human hands” (Acts 7:48). This point is taken from a passage within the context of the creation of the new heavens and new earth – a Hebraic way of saying a new people or nation (Isaiah 65:15)[2]. The passage he quotes from is Isaiah 66:1-2, but he leaves off the latter part of Isaiah 66:2 and replaces it with his own commentary on the passage.

Stephen’s audience was aware of the context of this passage, so him claiming that they were the ones that were the object of this prophecy meant one thing: they would receive all the punishments listed in Isaiah 65-66. These include receiving punishment for their iniquities and the iniquities of their fathers (65:6-7), being destroyed by the sword (65:12), being slain by God (65:15), be punished for persecuting the saints (66:6), face the fiery wrath of God (66:14-16), and other calamities. Stephen started his sermon by discussing the circumcision and calling of Abraham – an event that the Jews were most proud of; however, by the end of the sermon, his listeners were fuming because he called them uncircumcised. In other words, he was telling them that they were not the true children of Abraham and were about to be destroyed for their lack of faith.

Stephen’s point is to show that his message was not blasphemous against God or the Law, but that the whole purpose of the scheme of redemption was to arrive at Jesus. The Law had served its purpose and it would pass away when it was completely fulfilled at the fall of Jerusalem (Matthew 5:17-18; Luke 21:20-22). They were upset with His message that the temple would be destroyed, and that Jesus would change the customs of the Law, but Stephen pointed out that they didn’t even keep the Law that they were vainly defending (Acts 7:53). The prophets had foretold this message that they had rejected it just as their fathers had rejected the prophets when they first spoke. Their fathers killed the prophets in the same way that they rejected and killed Jesus and as they were about to kill Stephen (Matthew 23:29-39).

Stephen, like so many other Christians to follow him, died for his faith in Jesus. His death was not in vain as seen in the fact that He was able to see God with Jesus at His right hand (Acts 7:55-56). He knew that his faith would be rewarded and that he would be vindicated within that generation at the fall of the temple – as Jesus so meticulously explained in Matthew 23:29-39. Though his death was tragic, it undoubtedly inspired others to take a similar stand for their faith in Jesus. As Stephen died, he asked the Lord not to lay the sin to their charge (Acts 7:60). Even in death he maintained a humble spirit likened unto the Master for whom he was willing to die (Luke 23:34). One of the men that consented unto his death – Saul of Tarsus – would go on to be converted and preach the same message that Stephen presented. We do not know how many Stephen brought to the Lord prior to his death, but his example has led many to have a stronger faith and follow in his steps.

Stephen: Was He Right?

Stephen taught that Jesus would come to destroy the temple and change the customs of the Law. In Matthew 24:2, Jesus predicted the fall of the temple, and He said that He would come again during the time of its fall (Matthew 24:29-31, 34). The book of Hebrews speaks of this same idea. In Hebrews 9:8-9, the Bible declares, “The Holy Spirit is signifying this, that the way into the holy place has not yet been disclosed while the outer tabernacle is still standing, 9 which is a symbol for the present time…” If the temple in Jerusalem stood, the way into the Holy Place was not disclosed. The temple was a ‘symbol for the present time’ at the time of the writing of Hebrews. The ‘present time’ was the Old Covenant age. The disciples understood this and asked when it would end in Matthew 24:3 in connection with the coming of the Lord and the destruction of the temple. At the ‘second appearing of Christ’ to fulfill the types and shadows of the Law, He would take away the first covenant to establish the second (Hebrews 9:28-10:1, 9; cf. Hebrews 8:13). This coming of the Lord would take place in a ‘very little while’ according to the Hebrews writer (Hebrews 10:37). Stephen’s, Jesus’, and the Hebrews writer’s messages were all the same: Jesus would return within that generation to destroy the temple and change the covenants. At this time, the way into the Holy Place would be made manifest and man could enjoy fellowship with God once more through Christ (Hebrews 10:19-22).

The message that Stephen spoke was not only consistent with the New Testament, but it was also consistent with the Old Testament as he eloquently established. Many passages – such as Daniel 12:11-13 – speak of the time when the temple would be destroyed at the end of the age. The Bible knows of no other eschatology than that which is based in Old Covenant promises made to Old Covenant Israel. Stephen died professing this eschatology, yet many today miss a grand opportunity to honor his death through demonstrating that the message he taught came to pass within that generation. Let’s honor the martyrs of the first century by affirming the same eschatology that they did. What was future to them as been fulfilled, and we now can enjoy the blessings and happiness that is available through the New Covenant that Jesus established. Stephen’s message proves that the coming of the Lord is fulfilled!

Be sure to get a copy of my book, The End of the Law: Torah to Telos, for an in-depth examination of the connection between the coming of the Lord and the end of the Law. 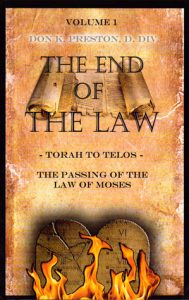 [1] In Matthew 24:2, Jesus indicates that the temple would be destroyed, and in Matthew 5:17-20, He teaches that the Law and Prophets would pass away when they were completely fulfilled to the very last jot and tittle.

[2] For example, the ‘heavens and earth’ of Babylon were destroyed by the Medes and Persians (Isaiah 13:1, 10, 13, 17). In like manner, Isaiah 65 and 66 are about the destruction of the heavens and earth of Old Covenant Israel and the creation of a New Covenant.